The Working Group consisted of representatives from the VOADs, the private sector, state and local governments. FEMA personnel from the National Integration Center (NIC) monitored the activities of the Workgroup but did not serve as a part. A contractor, paid for by FEMA,  provided administrative support. As the State Mass Care Coordinator for Florida I was asked to Chair this Working Group and I accepted.

Among the VOAD representatives were Lynn Crabb, the Mass Care Lead for the American Red Cross National Headquarters and Richard Hinrichs from the San Diego Chapter. Richard became the Chair for the Shelter Subcommittee of the Workgroup. The Shelter Subcommittee members included Randy Linthicum from California, Lynn Crabb and Doug Sandy from ARC, Tonya Roberts from Arkansas, Kevin Rawson from the US Navy and Harold Hansen from the International Association of Venue Managers.

The product of their efforts was the document entitled The Shelter Guidance Aid and Staffing Matrix. This product was and has been the only shelter document of its kind and now resides as a resource on the National Mass Care Strategy Website. The shelter classification outlined in this document was the basis for the Shelter Manager Job Title that was drafted by the Subcommittee and ultimately adopted by FEMA in June 2014.

The Shelters were classified in the document according to the kind of facility, with the criteria based on the expected length-of-stay of the occupants. The classifications by length-of-stay were: Evacuation (up to 72 hours), Standard/Short-term  (up to 2 weeks) and Long-term/Mega-Shelter (longer than 2 weeks). A characteristic of each of these kinds of shelters was that the amount of resources available increased as the length-of-stay increased. A Table outlining this classification can be found on pages 2 and 3 of the Shelter Guidance Aid. The graph below is a pictorial representation of the concept. 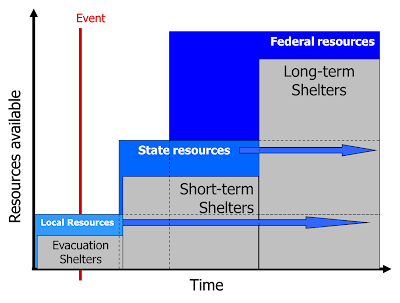 The efforts of the NIMS Mass Care Working Group were terminated in June 2012. After some bureaucratic delays the NIC returned to typing mass care resources in 2014.  As a part of this effort Chris Darlington with the NIC assembled another working group to advise FEMA on typing shelters. Uma Hiremagalur of the Red Cross and I, among others, were asked to serve on this group. We were invited to a meeting at FEMA HQS in Washington, D.C. in September 2014. Uma represented the Red Cross at this meeting.

There were very heated discussions during this day-long meeting. The conclusion and general agreement among the participants by the end of the day was that shelters should be classified by kind and type. There would be 3 kinds of shelters using the length-of-stay criteria outlined in the Shelter Guidance Aid. In addition, each kind of shelter would be classified according to type (capability).  Thus, each kind of shelter could be a Type 1 through a Type 4, based on the expected population.

Of course, none is this is etched into stone yet. As the national conversations proceed I wanted to give everyone some background information on where we've been before so that we can move forward with a common understanding.

Posted by Mike Whitehead at 8:26 PM No comments: