After 15 years as a State Mass Care Coordinator there is no topic more likely to launch me into an intense argumentative state than shelter reporting. Even as I write now I must pause frequently and take deep breaths. I was wondering why I haven’t written about it before and my emotional reaction at even reading the topic makes me understand why. I know from personal experience that many other mass care practitioners feel the same way. 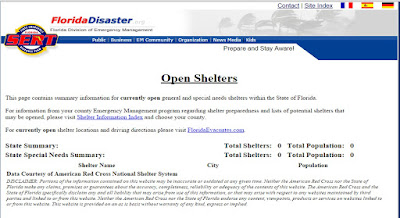 Shelter reporting during disasters is the process of identifying which facilities are open to host survivors who need “a safe, secure and accessible place” to spend the night and tallying the number of persons who are in each facility. In many disasters no shelters are opened and the shelter population is zero. During the evacuation for Hurricane Frances in 2004 120,000 persons were in 384 shelters in 56 counties, a Florida record that still stands.

So why all the trauma and angst over a simple little report? Because it’s not simple and it’s not little and most of the time the report is all screwed up.

When I started as the Mass Care Coordinator in Florida in November 1999 the Division of Emergency Management had a Lotus Notes database that was the platform for all the emergency messages entered by the State Emergency Response Team and the counties. The Lotus Notes platform had a separate database used for shelter reporting. All 67 counties in the state submitted their identified shelters to the state electronically and the 67 separate files were poured into this database.

Like everything else in my Mass Care Coordinator job there wasn’t a manual handy entitled “Shelter Reporting” that I could us as a reference. So we came up with a system and then improved upon that system through trial and error.

There were lots of errors.

In my mass care brilliance and urge to simplify complex problems I decided that the simple solution was to tell all 67 counties the information that we needed and then stand back and wait for them to comply. You can imagine the results. I wrote up the shelter reporting instructions to the counties on a one page document and developed state ESF6 procedures that when a disaster started we were to fax (FAX!!!) the document to each of the affected counties. I also put in the procedure that if the counties didn’t respond to our fax then we were to call them and give them a gentle nudge.

“Hello, this is Mike Whitehead up at the State EOC. Can I talk to whoever does your shelter reporting? Did you get our fax? No?”

We were fortunate when we started that the disasters didn’t involve a lot of counties. But the process was laborious, labor intensive and had to be repeated. EVERY. SINGLE. DAY.

We were also fortunate that the Lotus Notes database was easy to use. I could take the average state worker that volunteered to come in and help us during activations and in five minutes show them how to access the database and update the populations. Then I would give them the list of counties they were responsible for, a phone, a chair and a computer and step away with confidence that the job would get done.

I also learned that the constituency for shelter numbers during a disaster was wide and deep. As I accumulated days in the EOC as a mass care coordinator I could not help but notice that I would be questioned about the shelter count by one or more persons within 5 minutes of my arrival in the morning at the EOC. EVERY. SINGLE. DAY.

I’m not saying that the report isn’t necessary. Over the years I have come to believe in the importance of accurate shelter reporting. The number of shelters and the populations within those shelters is the single, best indicator of the level of distress that the particular jurisdiction is enduring from the disaster.

Governor Bush, in a way, made my shelter reporting problem both harder and easier by mandating that the list of open shelters in the Lotus Notes database be placed on a web site for everyone on the Internet to see. Then when I walked into the EOC I could respond to everyone’s shelter question by saying, “Go look on the website.”

In fact, I stood before packed EOCs and showed them on the gigantic screen behind me the button that would take them to the shelter count webpage.

“No one should ever have to ask me what the shelter count is,” I would intone in my most firm, this-is-the-real-truth voice. “The best information we have is up there on the web site. Go to the site and look it up.”

Of course, for the rest of the day, friends and strangers alike would stop me as I strolled through the EOC and ask, “What’s the shelter count?”

During the six (long) weeks of the 2004 hurricane season, in addition to all the other problems that I had, my time was consumed by the shelter reporting issue. My weary answer of “Go look on the website” to the never ending queries that greeted me EVERY SINGLE DAY of the 42 day 2004 hurricane season was rewarded with the response. “I did. But are those numbers right?”

So. We had enough problems getting the simple facts straight and now you want to bring this into the mix? What is good? What is bad? What is right? What is wrong? What do I look like? A philosophy teacher?

Patience, grasshopper. Does anyone ever really step into the same river twice? The water that I step into today is different than the water I stepped into yesterday.

Sometime during the 2004 hurricane season (or it may have been the 2005 season, it all starts to blur together now) I was summoned from my critical mass care coordination duties on the EOC floor to another room in the building to appear before Governor Bush himself. This was the only time that I was asked to speak to the Governor on any topic, emergency management or otherwise. I was accompanied on this mission by my friend Ray Runo from the Department of Health. Ray was responsible for gathering the information on the special needs shelters, which he submitted daily to the ESF6 staff, who entered the information into the Lotus Notes database.

“So what do I have to do to see the current shelter count?” Jeb asked me.

“The shelter count is available to everyone on our website,” I replied.

“Really? I didn’t know I could get this on a website.”

Maybe he forgot. Governors are busy men and make lots of decisions. Anyway, he was happy and we were happy and Ray and I returned to our more pressing duties.

A big breakthrough came when (I’m not sure exactly where in the chronology this happened) we discovered that the Red Cross was also collecting shelter numbers for the shelters they operated (the great majority) on a database operated at the Capital Area Chapter right there in Tallahassee. Duh. Chris Floyd, the Emergency Services Director for the Chapter, gave us access to his website (Tallytown.com, I still remember that) and we manually transferred the Red Cross data into our Lotus Notes database.

Yes, that was a duplication of effort by much easier than faxing all the counties and calling them when they didn’t respond.

In 2006, after we had worked through much toil and travail to develop a serviceable and easy to operate real-time shelter reporting system, Florida decided that they were going to discontinue the Lotus Notes database and move to a different system. Good grief, said Charlie Brown.

I have been reminded (just last week, in fact) of how sensitive this topic is to many people. In fact, we have a saying in the national mass care community: do not discuss religion, politics or the National Shelter System(s) at the dinner table. (Actually, I’m not sure if we actually have this saying but if we don’t, we should.)

Once upon a time, in the dark days after Hurricane Katrina, the American Red Cross created a National Shelter System so that the nation would never again have the problem of not knowing how many people were being sheltered across this great land. Money was invested to create a web-based software system that could be utilized by Red Cross staff and volunteers across the nation.

After the Red Cross system was created, deployed and in use FEMA decided to spend money to create a web based system to track how many people were being sheltered across this great land. FEMA decided to call this system the National Shelter System.

I only bring this up because in 2007 I was searching to replace our beloved, battle-tested and easy-to-use Lotus Notes system that the State was going to take away from us. The way I saw it, we had 3 choices: 1) Buy a new system, 2) use the Red Cross NSS, or 3) use the FEMA NSS.

After investigation I came up with the following information: 1) the state had little if any money to spend on shelter databases, 2) the Red Cross system was deployed and in use by staff and volunteers across the nation, 3) the FEMA NSS was still in development, housed within the armor plated Department of Homeland Security firewall and had formidable login and password requirements.

And so it came to pass in 2008 that my friend Omar Abou-Samra from Red Cross National Headquarters and I got down to figuring out how the State of Florida would adopt the Red Cross NSS as our shelter system of record. The only issue appeared to be our requirement that our open shelters be posted on a website.

The lawyers got involved (always a bad sign) but they drafted a disclaimer for us to put on our site. With that our Information Technology people took a data feed from the Red Cross NSS and put it on our website. This happened in July 2008 just in time for us to utilize it for the shelters that were opened across the state as a result of Tropical Storm Fay. This is the system that the state of Florida still uses today.

I tell this story to show everyone that shelter reporting can be done right. The reason that it’s done so well now in Florida is that we had an inordinate amount of time in 2004 and 2005 to keep practicing until we got it right. The rest of the nation shouldn't have to endure the same ordeals that we did in order to get a simple, little report right..

Right now at Red Cross Headquarters we are finalizing the new Shelter Standards and Procedures doctrine. A significant amount of effort has gone into making sure that we get the shelter reporting procedures right. I’ve seen what we’ve done so far and it looks pretty good.

That means that there’s hope.

Posted by Mike Whitehead at 6:30 PM No comments: